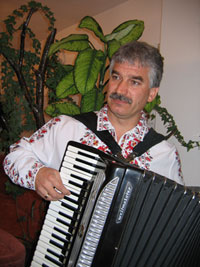 Todor Yankov (accordion) was born in 1962 in Plovdiv, but he grew up in the village of Dobralak in the Rhodopi Mountains in a large family. His father, Vasil Yankov, was a well-known gaida player in the area. Todor began to play gaida, like his father, and then when he was 10 year old, he took up kaval. Soon after that he became an orphan and had no one to send him to study at Shiroka Lûka Music High School, which had been his dream. When he was 16, he discovered the accordion and began to teach himself to play.He is also a wonderful singer. For many years he played with the Hisar folk orchestra at different holiday celebrations. He has been the accordionist for the following folk dance ensembles: Rûchenitsa, Hebar, Pûldin and now-Ensemble Voivodintsi. In 1980 he graduated from the Construction Trades High School in Plovdiv, where he studied electrical installation. He currently works as a machine operator in the Plastics division of Liebher Corporation.

Iliana and Todor have met each other in 1984 in Ensemble Ruchenitsa.Soon after that their roads of life went in different directions. In 2004,Todor invited Iliana to be his colleague and work as a Choreographer in the village of Voivodinovo. Both of them have founded Ensemble Voivodintsi with 30 dancers and singers.Now the members are 150. The villagers are proud of their Ensemble!

Since 2007 Iliana and Todor are traveling and teaching together around the World. They are leading tours in Bulgaria for their friends-folk dancers and musicians.