Iliana Hristova Bozhanova was born in 1961 in Galabovo, in the Stara Zagora region of Bulgaria. She grew up in a family of musicians and singers in South Thrace. In 1981, she graduated from the National School for Art Instructors in Plovdiv. She completed her Bachelor’s and Master’s degrees in "Bulgarian Folk Dances and Choreography" at the Academy of Music, Dance and Fine Artsin Plovdiv, the oldest folk arts academy in the Balkans and the most acclaimed in Bulgaria.

At the age of fifteen, Iliana became a member of the folk dance Ensemble Rachenitsa in Plovdiv.Her experiences with the Ensemble, under Artistic Director Dimitar Doichinov, inspired Iliana to devote the major part of her life to Bulgarian folklore. Through the ensemble she had the opportunity to perform Bulgarian folk dances in other parts of Bulgaria, as well as in Greece, Serbia, Poland, Belgium, Portugal, France, Italy, Holland, and Russia. She met many wonderful people through this group, and it was here that she took her first steps as a dance teacher.

In 1981, Iliana became choreographer and artistic director of two children's folk dance ensembles – Ensemble Radost in the village of Yoakim Gruevo, and the Children’s Ensemble of the Roza Dimitrova Orphanage in Plovdiv. She created her first dance choreographies for these children and also introduced both groups at the Festival for Amateur Folk Art in Plovdiv.

Since October of 2004, Iliana has been the director and choreographer of Ensemble Voivodintsiwhich is comprised of 8 dance groups, 4 of children and 4 of adults and a female singing group. The members of the Ensemble are 150 people.

In 2005, Iliana has been invited to serve as Dance Coordinator for the Folk Seminar Plovdiv-at the Academy of Music, Dance and Fine Arts in Plovdiv.

The other very important part of her life is organizing tours in Bulgaria for many of her dance students and friends from all over the World.

Besides her work as a dance teacher and choreographer, Iliana has worked as a technician of architecture and civil engineering. She is married and has two sons.

Iliana’s Work as a Choreographer 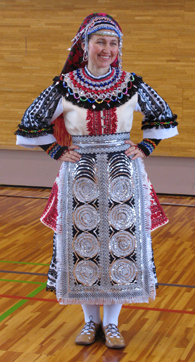 Iliana is appreciative of the opportunity Bosilek has given her to create these choreographies and share the wonderful richness of Bulgarian folklore, and for "opening the door to the world," as she began her international teaching career.

Iliana has also worked as a choreographer for Ensemble Zarove in Najmegen, Holland, since 1995. The artistic director of this wonderful children's group is Esther Willems.

In June 2004, Iliana was invited to create a Bulgarian dance choreography for Het Internationaal Danstheaterin Amsterdam, with artistic director Maurits van Geel. Her choreography, Spozdrav ot Bulgaria, was part of their big dance performance, "Finale 10,000 Volt." This is the only professional international folk dance theater in Holland, and Iliana was honored to have been chosen to work with their dancers, musicians and faculty.

Choreographies for other folk dance ensembles include:

Iliana has presented lecture-demonstrations on Bulgarian folk art and dances at these universities:

Iliana has also given presentations at high schools in New York, Vermont,Washington and Pennsylvania States.

Work in other countries includes:

Iliana’s repertoire of dances that she has taught to folk dancers in the USA, Europe, and Asia includes:

The music for these dances is available in a series of CDs entitled, “To the Bulgarian Folklore with Love” by Iliana Bozhanova and Lyuben Dosev.

The latest dance collections, Iliana has produced and presented with her colleague Todor Yankov. These are: